1918 – The Criminology and Criminal Justice Building, originally known as the Education Building, opened its doors to Florida State College for Women (FSCW) students. The Education Building was the first building on campus devoted entirely to classroom use. Designed in the Tudor style, this handsome brick building is adorned with a stonework owl, frogs and Florida’s state seal. 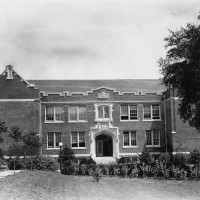 1934 – The Education Building underwent its first remodel as the northwest corner of the building began to sink into the soft clay of Gallows Hill. The northwest wing of the building was razed and rebuilt on a concrete foundation. The walls were then reinforced and dormers were added to the attic for increased space.

1950s – The College of Education moved across campus to the Stone Building and its former home received a new tenant and title. Students would come to know the Criminology & Criminal Justice Building as the Psychology Building for the better part of five decades, until the psychology department followed the College of Education’s lead and headed west for a more spacious facility. With the departure of psychology, the Criminology & Criminal Justice Building became home to a number of small programs looking for office and classroom space of their own. 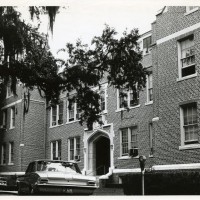 2012 – Eppes Hall, under the direction of Thomas Blomberg, dean of the College of Criminology and Criminal Justice, underwent a $3 million transformation. Central air conditioning, state-of-the-art technology in the classrooms, and collaborative learning environments, to name a few, were included in the master plan.

2013 – 95 years after first opening its doors to students, Eppes Hall became the new home to one of Florida State University’s highest ranked academic programs, the College of Criminology & Criminal Justice. 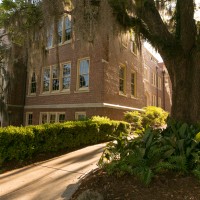 2014 – The College of Criminology and Criminal Justice won the 2014 Tallahassee/Leon County Historic Preservation Award for outstanding achievement in the Civic/Community Resource Preservation category for the renovation of Eppes Hall.

2021 - Florida State University President John Thrasher ordered that Francis W. Eppes' name be removed from the College of Criminology and Criminal Justice Building, accepting the recommendation from the President's Task Force on Anti-Racism, Equality, and Inclusion. Thrasher noted that Eppes' "role in the early days of FSU notwithstanding, Eppes was a slave owner and a justice of the peace who oversaw the capture of escaped slaves, and as such he should not be honored on our campus with a building in his name."